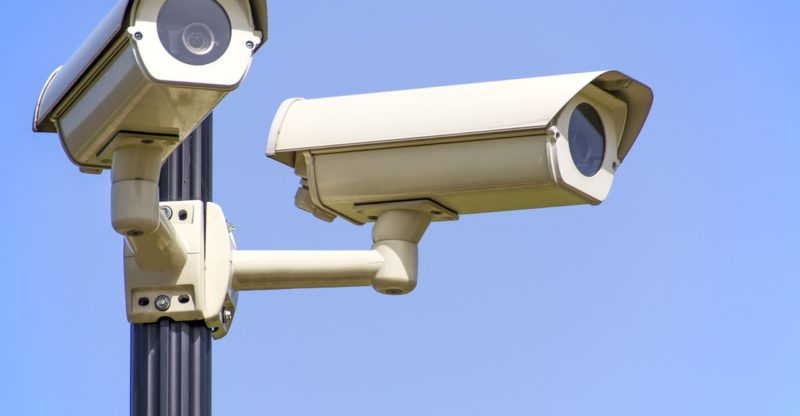 When we talk about China and its people, the vast majority of us probably think of them as the same race, East-Asians.

However, China is incredibly diverse and its territory is as big as the United States.

The people we always refer to as “Chinese people” are an ethnic group called “Han Chinese.”

In addition to those ethnic groups, China has many cities that has historically imported a lot of foreign cultures as well, like Hong Kong, Macau, and Taiwan.

Religions are no exception.

Thus, China is a country that has much more diversity in ethnicity and culture than we normally think.

Given that, here is what’s happening in China right now.

This article will clarify what “the China’s secret internment camp is” and the reasons why the Chinese government has to send Uighur Muslims to the internment camps.

As mentioned above, China is a very diverse nation.

There are so many different ethnicity, culture, and religions throughout the country. 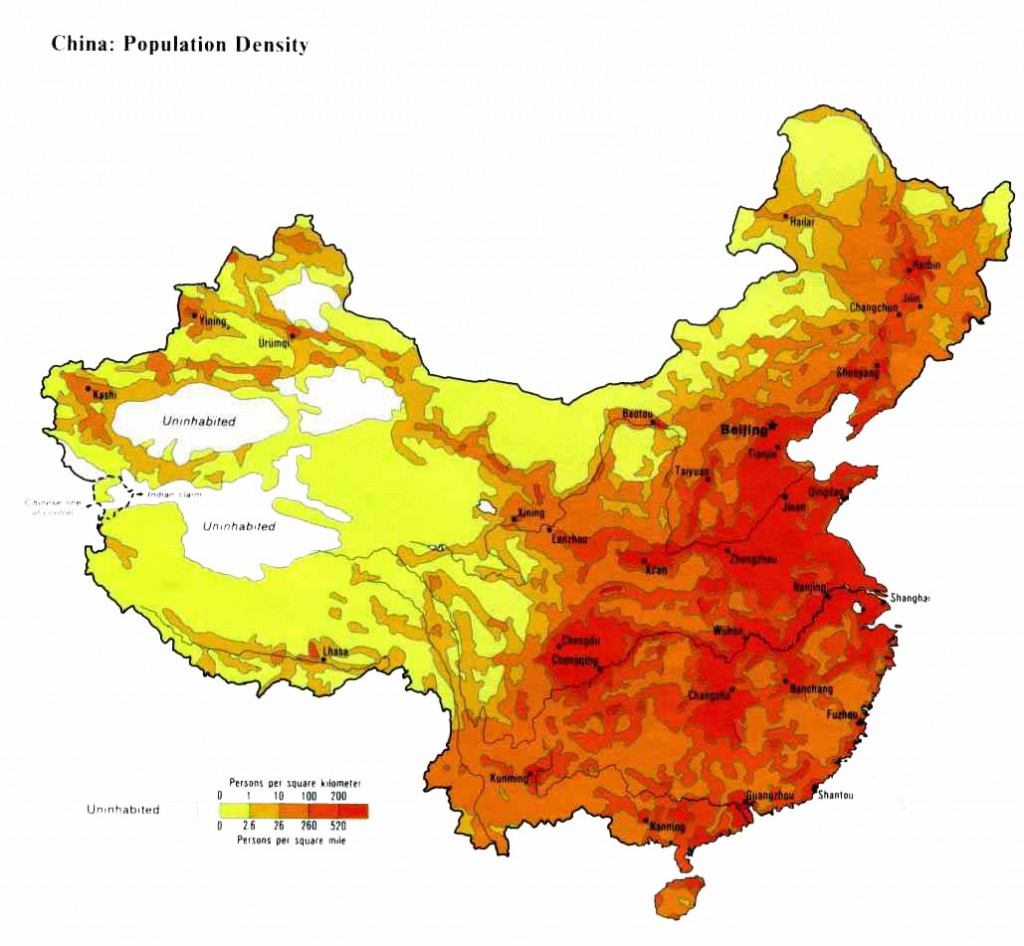 As you can see this map, the population density of China is heavily concentrated in East.

Han Chinese people live in these East areas of China.

This line that divides the area of China into two parts is called “Heihe–Tengchong Line”. 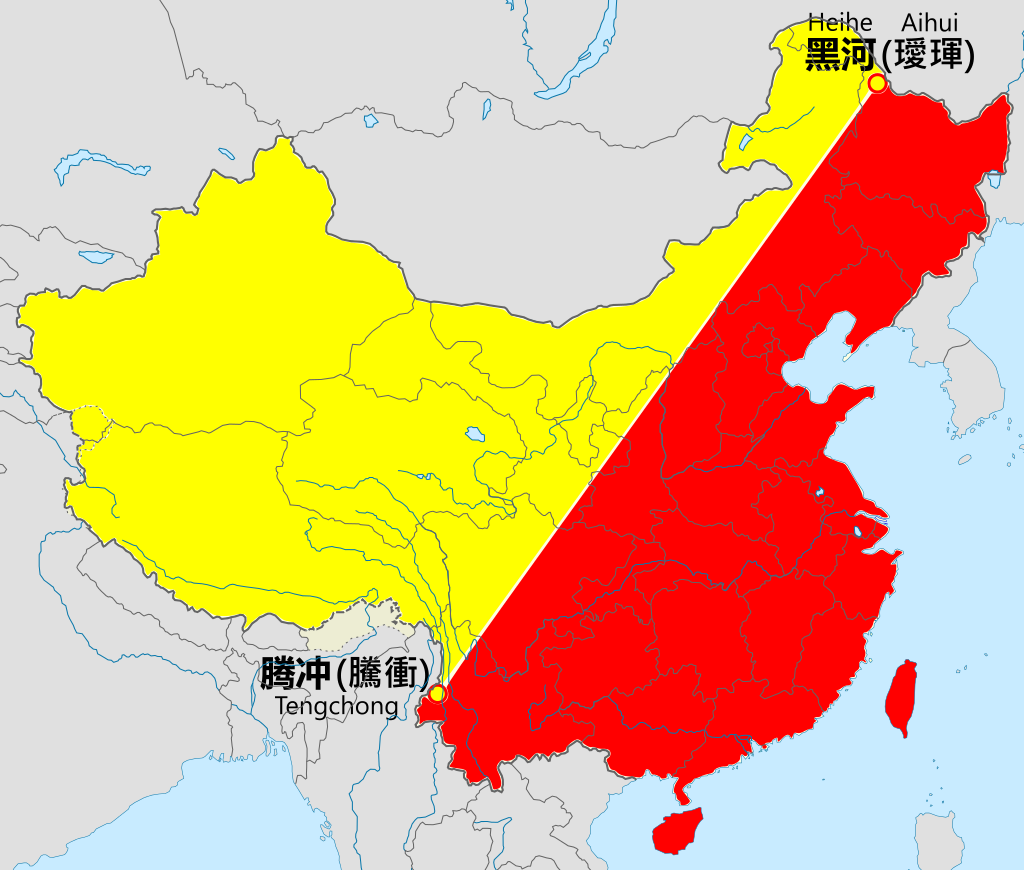 The cultural prosperity is concentrated in these East areas as well as the population.

The big cities in China such as Hong Kong, Shanghai, Beijing, and Chongqing are all located in East.

If you want to see beautiful mountain chains, great plains, and desert in China, it’s always better to go to west side of China instead of East that has big cities.

But the question is “who is living in West side of China?”

Yes, the minority of Chinese people are in the West.

So far, you may got to learn how diverse China is.

It might be a common sense that the United States is a country that has so many different people and culture, but the same goes for China as well.

However, the big difference between these two countries is the political systems.

As U.S. is called as “United States,” America is basically the country that consists of different states that have their own government and rules.

Each state has very strong power and American citizens have rights to vote and literally get to choose for their president.

On the other hand, China is a socialist republic, and it’s government is run by one party.

National decisions are always based on Chinese Communist Party.

As a result, the government has to be thorough on people’s political ideology and morel very strictly, otherwise this one-party system simply doesn’t work.

I’m not debating which political systems are better or worse here, but these are what differentiate the Chinese government from the American government. 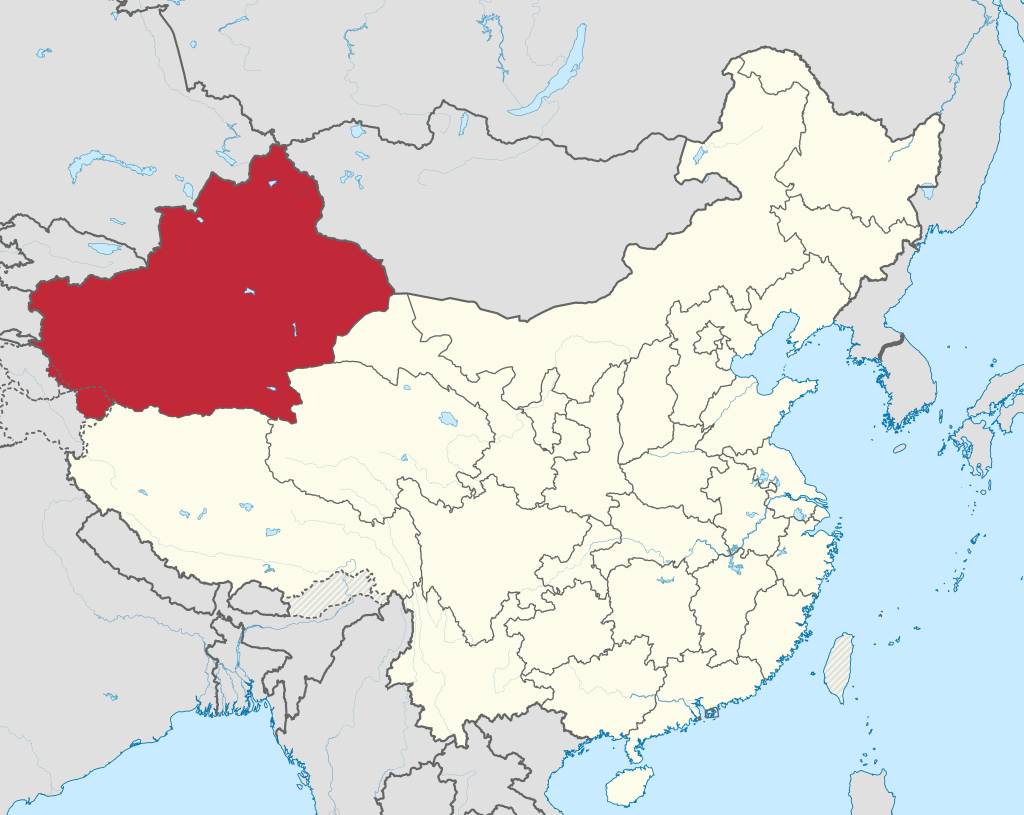 Uighurs are mainly in Central and East Asia.

The map indicates the area that Uighurs in China live and the province called “Xinjiang Uighur Autonomous Region.”

Since it is geographically close to the countries in Central Asia like Kyrgyzstan and Uzbekistan, their culture is also more similar to Turkic than Han and they primarily practice Islam.

The same goes for their language as well.

There is a Uighur language, and it is classified as the Turkic language family.

Uighur has historically been invaded by so many countries.

During the time of the famous Mongol Empire of Genghis Khan, this region was taken over by Mongols.

In 17th centuries, the Dzungars established an empire over much of the region.

Soon after that, the war between Qing Dynasty (China) and Dzungars broke out, and Qing successfully invaded Dzungars.

The region got its independence as East Turkestan Republic twice in 1933 and 1944 by Islams, but both resulted in failure.

After Second World War and Chinese Civil War, the region was incorporated by People’s Republic of China.

Basically, Uighur has very prosperous culture and rich history, but China argues it is indisputably a part of China to this day.

Now, Uighur is a part of China.

And China will never accepts the region to be independent as East Turkestan Republic.

That is because this region is economically and strategically very important for China.

One reason why China never gives up this region is because it has very rich in natural resources.

40% of coal reserves in the whole country is provided by this area.

It also accounts for over 20% of oil, gas, and China’s potential for wind energy.

China needs those natural resources for country’s growth more than ever, and that is where Xinjiang locates.

China is one of the few countries in the world  that have nuclear weapons.

Since desert makes up most of area of this region and no one is living these places, Xinjiang is the “best place” for nuclear tests.

In fact, nuclear tests have been taken place in Xinjiang for 46 times since 1964.

Of course, the environmental destruction in this region are huge, and some people were actually subject to the damages.

In Ancient China, there was trade network routes that connected East and West.

Belt and Road Initiative is basically the same idea, and they are trying to establish gigantic global trade network around the world.

Chinese government has been developing this project by involving infrastructure development and investments in more than 150 countries around the globe.

The Xinjiang region is essential for this project. 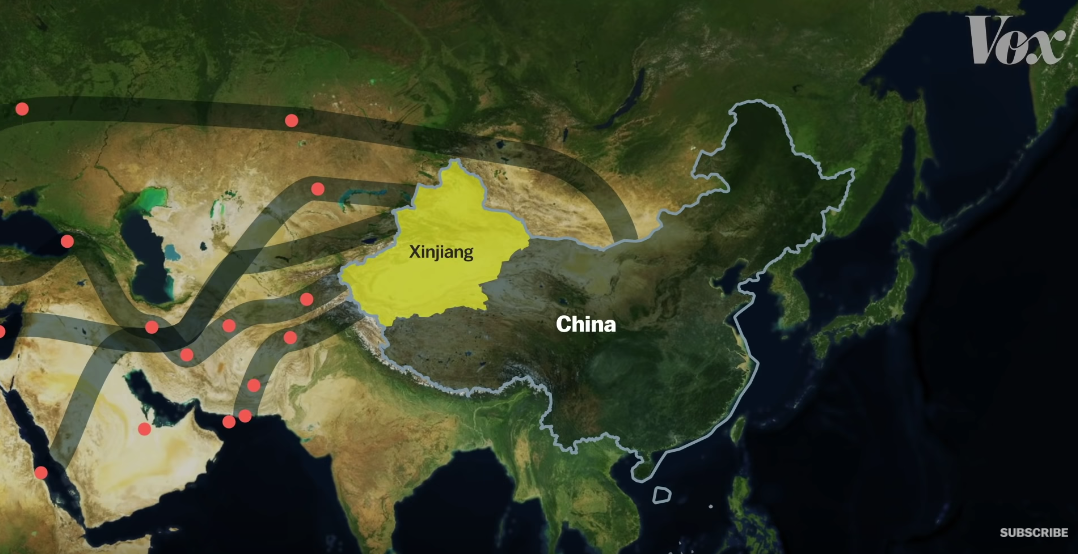 As you can see it, it is impossible without this region.

Now we know Xinjiang is significantly important for China’s development, and China needs it to be a part of the country.

But the problem is Xinjiang has very different culture and history, and it even has a different language from Han Chinese. 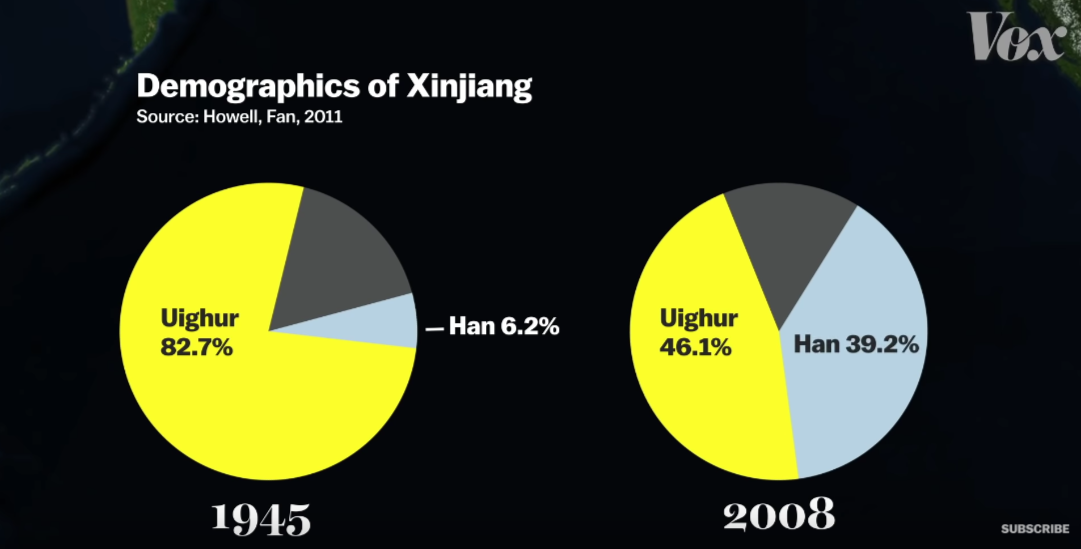 However, the population of Han Chinese increased up to 39.2% in 2008 thanks to this policy.

What the problem here is that it resulted Han Chinese took Uighurs’ jobs.

As indicated in the graph below, Uighurs are working low-wage job in agriculture, and higher paying jobs are mainly held by Han Chinese people. 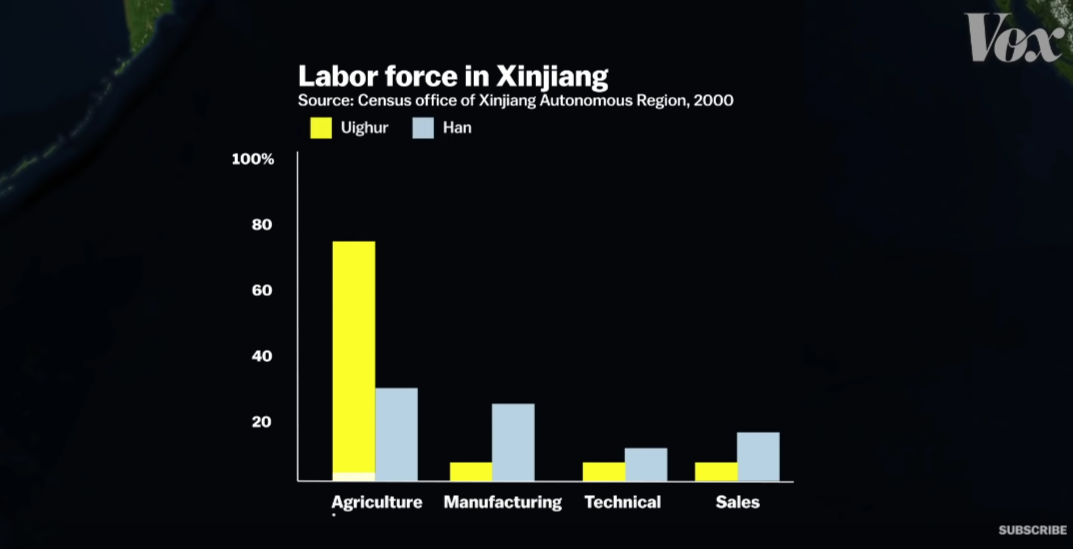 Through this policy, it is a fact that Chinese government is trying to assimilate this region to “Chinese culture”more and more, and eventually make it a part of China.

Given these situations, it finally evoked the protest against discrimination in 2009.

Sadly, it only made matter worse.

It was only about few years ago that Chinese government started radically watching Islams and separatists in this region, and Xinjiang became a hi-tech police state.

They even jailed Muslims just because they wore a hijab.

In December 2018, the information was leaked that there are about a million Uighurs who are Jailed to Internment Camps.

In the camps, they are forced to sing China’s National Anthem and recite Communist propaganda everyday.

As for meals, they only get to eat Chinese bun and tasteless vegetable soup.

If they resisted about it, inmates would get punished.

So basically, this is what’s happening in Xinjiang in the 21st century.

We Need To Be Informed

What Chinese government is doing against the minority in their country is extremely inhumane.

But the problem is information is very limited because of their regulation policy in China.

Once they leak information about the internment camps or just tell bad things about the government, they are sent to jail.

Due to that fact, it is extremely difficult for journalists to get local information of the region.

Moreover, even in the media industry, there are not many people who have wide knowledge about Xinjiang and Uighurs.

As for other Islamic countries, they never speak up against Chinese government and about this issue simply because they don’t want to mess up with Chinese government that have economically strong influence today and their relationships.

However, it is always great to have internet and the source of information and we can be more informed about international issues like this. 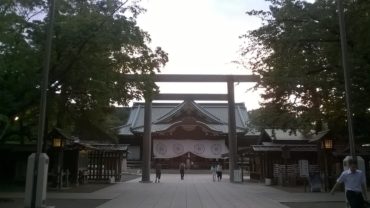